Start Winning on Those Low Cards

If you like 3 Card Poker, then you’re going to love this exciting new casino game! Three Card Lowball Poker is an easy-to-understand, fast-paced game that will turn your bad luck into good luck, which is perfect for keeping you in the casino longer, winning on hands that you would normally fold.

So if you’re having one of those days, where you’re getting nothing but crap cards, then it’s time to move over to this game and start winning. How? It’s easy when the object of the game is to have a lower poker hand ranking then the dealer. 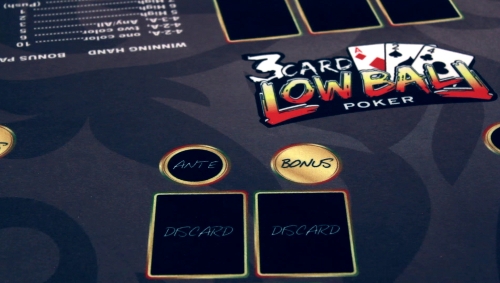 Here’s how you play. You’ll start the game by placing two mandatory bets on the table, the Ante and the Bonus. These bets must be of an equal amount. In some casinos, you’ll also have the option of betting on the Progressive Jackpot. The cards will be delivered once you’ve finished betting. Both the players and the dealer will get 3 cards face down. Remember, you’re only playing against the dealer and not against any of the other players. 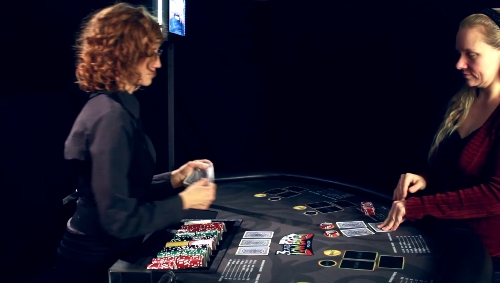 In an interactive twist, you’ll get to choose which cards you want to discard and which ones you want to keep. However many you discard, is how many you’ll get back as new replacement cards. You’re only allowed to discard between 0 and 2 cards. You are not allowed to discard all three cards. A good strategy for how the Players should play is they should discard anything that is 8 or higher and they should always break up pairs, straights and flushes.

In this game, the Ace represents one, or the lowest ranking value versus all of the other cards. For example, a pair of 2’s is a higher ranking hand then a pair of aces.

When the players are finished with their cards, the dealer will flip over their hand and decide which cards to keep and which to discard according to the House Way. The dealer will qualify on every hand. 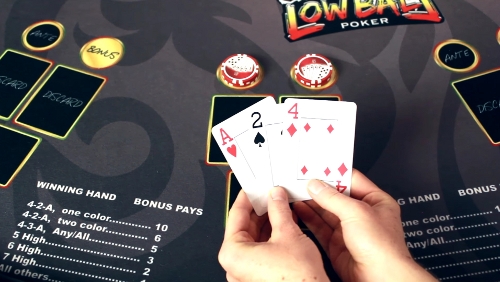 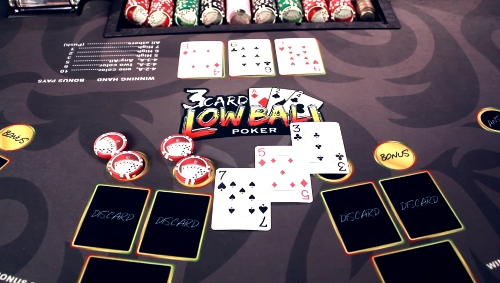 If the player wins, the Ante is paid even money and the Bonus is paid according to the pay table. If the player loses, then the dealer will take both of their bets, regardless of whether or not the player qualified for a bonus. If the player’s hand is the same as the dealer’s hand, then this is a tie and both bets push. If the Progressive option is available, then the dealer will resolve that bet last, based on the posted pay table. Once all of the bets have been determined and the hand is over; the cards will be collected and a new round will begin. The House Edge on this game ranges from 1.85% to 3.7%, depending on what pay table is used. There are different versions and different pay tables available.

So the next time you’re playing on Three Card Poker, and you find you’re having a bad day, then just move on over to Three Card Lowball Poker and start winning on those low cards!